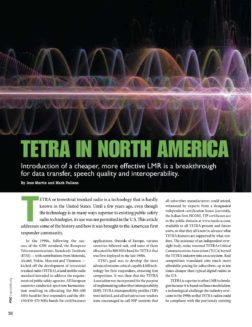 The official APCO International Magazine, PSC, Public Safety Communications, published in the 2021 January / February issue an interesting article about the evolution of TETRA in North America.

TETRA or terrestrial trunked radio is a technology that is hardly known in the United States. Until a few years ago, even though the technology is in many ways superior to existing public safety radio technologies, its use was not permitted in the U.S. This article addresses some of the history and how it was brought to the American first responder community.

In the 1990s, following the success of the GSM standard, the European Telecommunications Standards Institute (ETSI) — with contributions from Motorola, Alcatel, Nokia, Marconi and Thomson — kicked off the development of terrestrial trunked radio (TETRA), a land mobile radio standard intended to address the requirements of public safety agencies. All European countries conducted spectrum harmonization resulting in allocating the 380-400 MHz band for first responders and the 410- 430/450-470 MHz bands for civil/business applications. Outside of Europe, various countries followed suit, and some of them allocated the 800 MHz band for TETRA that was first deployed in the late 1990s.

ETSI’s goal was to develop the most advanced mission-critical-capable LMR technology for first responders, ensuring free competition. It was then that the TETRA Association was incorporated for the purpose of implementing subscriber interoperability (IOP). TETRA interoperability profiles (TIP) were defined, and all infrastructure vendors were encouraged to call IOP sessions that all subscriber manufacturers could attend, witnessed by experts from a designated independent certification house (currently, the Italian firm ISCOM).

TIP certificates are in the public domain at www.tcca.info, available to all TETRA present and future users, so that they all know in advance what TETRA features are supported by what vendors. The existence of an independent oversight body, today renamed The Critical Communications Association (TCCA) turned the TETRA industry into an ecosystem. Real competition translated into much more affordable pricing for subscribers, up to ten times cheaper than typical digital radios in the U.S.

TETRA is superior to other LMR technologies because it is based on linear modulation, a technological challenge the industry overcame in the 1990s so that TETRA radios could be compliant with the previously existing adjacent channel protection (ACP) requirements in force for analog radios.

TETRA could not be type accepted in the U.S. or Canada until 2009, more than 10 years after the first deployment in Europe, because the emission rules in both countries were based on outdated emission masks and occupied bandwidth limits that had been conceived decades ago for analog transmitters. Emission masks were still valid for other digital technologies based on non-linear modulations because their radiated spectrum resembles an analog radio’s (low data throughput).

Given that the TETRA modulation did not meet the boundaries of the applicable emission masks by a very narrow margin, PowerTrunk conducted research to seek viable ways to get through equipment authorization. Then the roll-off factor of the TETRA amplifier’s filter was modified, making the resulting spectrum compliant with the emission masks and occupied bandwidth limits set forth by the Federal Communications Commission and Industry Canada. Such an implementation, called “reduced power TETRA” by some parties, made TETRA commercially available in North America as PowerTrunk put it in the public domain, therefore making it usable by all TETRA vendors.

Following the first TETRA contracts in Canada (BC Hydro, British Columbia, 2011) and the U.S. (New Jersey Transit, 2012), Industry Canada amended its RSS-119 rules to replace the emission masks with ACP criteria and the FCC followed suit in September 2012 through a report and order amending its Part 90 rules in the 800 MHz and 450-470 MHz bands. Nowadays, TETRA is accepted in the 809-824/854-869 MHz band, including public safety pool channels, and 450-470 MHz, including Part 22 frequencies.

Interestingly, the certification rules in the narrowband portion of the 700 MHz band (769-775/799-805 MHz) have always been based on ACP criteria as recommended by the Telecommunications Industry Association (TIA), thus emission masks were not an issue.

However, the FCC requires that all transmitters operating in 700 MHz must be capable of operating on the designated nationwide interoperability channels, meaning that all subscriber radios in that band must be APCO Project 25 Phase 1 capable. This new technological challenge was addressed and resolved through a new generation of multimode TETRA-P25 subscribers allowing to select TETRA or P25 mode through the user menu. Following a long period of uncertainty in relation to the required P25 functionality on nationwide interoperability channels, including a rulemaking conducted by the FCC, the latter adopted the recommendations from the P25 Advisory Panel through its February 12, 2018, report and order. Ever since, the new generation of multimode TETRA-P25 radios, FCC- and Compliance Assessment Program (CAP)-certified, is undoubtedly compliant with all the requirements in force in the 700 MHz public safety band.

MTA/New York City Transit (NYCT) issued a request for information (RFI) in 2013 and issued a request for proposals (RFP) in 2015. MTA owns licenses in 700 MHz and 800 MHz, thus all subscribers must be capable of operating on the nationwide P25 channels, which was accomplished through the aforementioned multimode radios. In February 2016, MTA awarded Parsons Transportation a contract for the NYCT bus radio system with TETRA technology, intended to serve as data backhaul for an advanced CAD/AVL application’s basic functions (GPS location and other parameters updated every 30 seconds for up to 6,250 buses, expandable to 12,000 vehicles). The first phase of deployment has already been completed in Staten Island, the New York City borough selected by MTA for system integration testing, meaning that the first 700 MHz TETRA network in North America is already live.

Owing to the above, a few paradigms are changing very quickly. First, data-centric applications are now possible through an LMR technology (TETRA). Second, cellphone-like speech quality on LMR subscribers is now a reality. And third, TETRA is now commercially available to all public safety users in the U.S. in full compliance with FCC and DHS rules (P25 interoperability). This entails significant, transformational consequences into the LMR North America market.

The most advanced LMR technology in the world (TETRA) — extensively deployed in Europe (e.g., Britain’s, Germany’s and Italy’s TETRA networks for public safety), Asia (e.g., Malaysia, South Korea, Indonesia) and Latin America (e.g., Brazil, Mexico, Peru) — is now offered in the U.S. and Canada at the same affordable price as in the rest of the world thanks to the international TETRA ecosystem and the benefits of an independent oversight body, the TCCA.

The paradigm shift is also relevant to interoperability. Consistently, backwards compatibility of new digital radios with legacy analog equipment has been implemented through gateways in the rest of the world as otherwise the price to subscribers would be too high, and that would not be acceptable to taxpayers. Compatibility is desirable, but not at any price, especially if suitable, capable gateways are available, allowing public safety authorities to effectively coordinate their resources from operations centers. TETRA, much more affordable than other comparable LMR technologies previously available in North America, allows for implementing analog-to-digital migration much faster, thus making backwards compatibility unnecessary as is common in the rest of the world.

Jose Martin, M.Eng., President and CEO of PowerTrunk (www.powertrunk.com), is a veteran engineer and executive that served formerly as CTO and CMO of several land mobile radio and fiber optics cable manufacturers. As CMO of PowerTrunk’s parent company Teltronic he led the introduction of the TETRA technology in the United States and Canada. He’s served as Board Member of the Association of Electronic Industries of Spain (ASIMELEC) and Vice Chairman of the TETRA Rail Forum (TCCA). He lives in Jersey City, New Jersey.

Mark Pallans is an electrical engineer, an APCO Life Member, a Fellow of The Radio Club of America and the General Manager of Pallans Associates Communications Consultants. Previously he served as Telecommunications Manager of the city of Fort Lauderdale, Engineering Manager for the Miami–Dade Police Department and System Administrator of the Nevada Shared Radio System. He is a member of the APCO Editorial Advisory Committee and on the IWCE Advisory Board.