A gold mine in the Canadian Arctic is using custom narrowband data applications to improve security and operations. 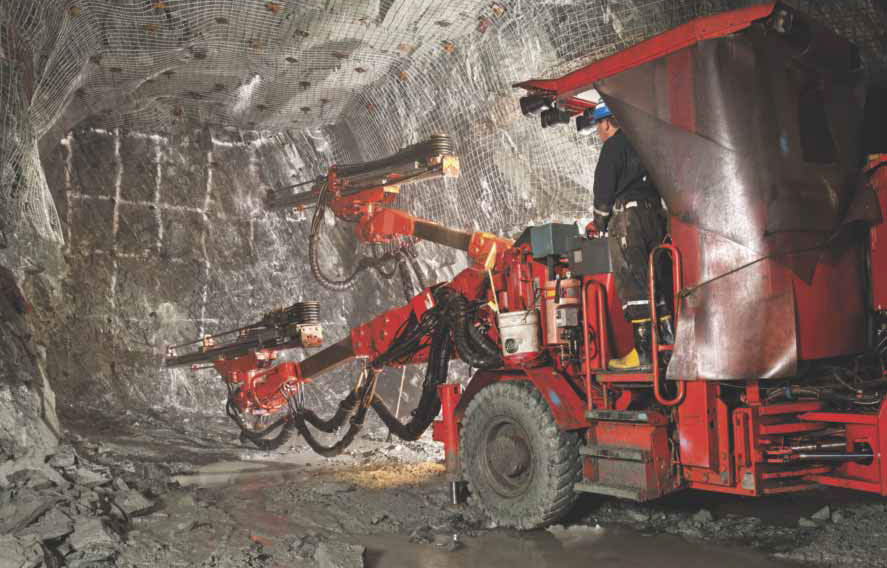 North America is no stranger to gold rushes. One of its most famous, the Klondike Gold Rush, also known as the Alaska Gold Rush, from 1896 to 1899 saw an estimated 100,000 people, mostly from Seattle and San Francisco, migrate to the Yukon region in north-western Canada prospecting for gold. People and companies are still hoping to strike gold in these remote lands. Although more than a century has passed and technology has evolved in leaps and bounds, mining for gold in the Canadian Arctic is still a challenge not to be taken lightly. One such company defying the odds is Agnico Eagle Mines, a Canadian-based gold producer with operations in Canada, Finland and Mexico, and exploration and development activities extending to the United States and Sweden. When it came to delivering reliable, resilient and dependable communications in one of the harshest, most unforgiving environments, Agnico selected TETRA radio technology for its exploration and production operations.

The Meliadine project, located in the low Arctic of northern Canada, is Agnico’s largest development project, based on mineral reserves and mineral resources. The project has 3.4 million ounces of gold in proven and probable reserves, and a large mineral resource. According to Agnico, the mine could produce 400,000 ounces of gold per year during a 14-year lifespan, and the company hopes to run the mine from 2019 to 2033 and possibly longer. 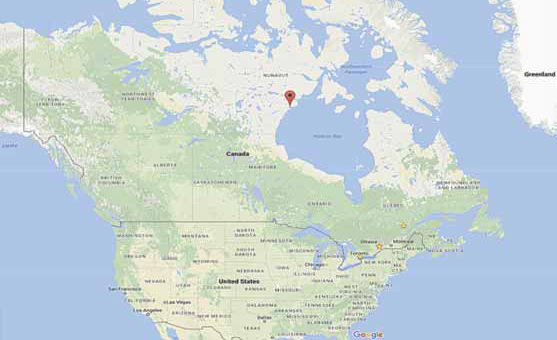 Location of the Meliadine gold mine in North America

Open-pit and underground mining operations all have built-in hazards that exist wherever they are located, but the gold mines in Nunavut have additional unique challenges to manage. One of the first obstacles to tackle is that the high-grade gold project is located near the western shore of Hudson Bay in the Kivalliq region of Nunavut, about 25 kilometers north of the hamlet of Rankin Inlet and 400 kilometers south of the Arctic Circle.

Although filled with breathtaking natural beauty and rich in native Inuit culture, Canada’s Nunavut territory is a massive and desolate expanse of rock and ice, about the size of Western Europe. It has a population of just more than 35,000. The mine’s remote location means that all equipment, fuel and dry goods depend on a single annual delivery that arrives via a warm-weather sealift barge to Rankin Inlet. Personnel, perishables and lighter goods arrive at the local airport. A new all-weather access road between the mine and Rankin Inlet has reduced the high transportation and logistical costs for exploration and development work.

Ensuring the safety of its employees is the mine’s No. 1 priority. Although polar bears are not a threat to the operation of the mine, other wildlife, such as migrating caribou herds, can have an impact. But the greatest threat workers have to contend with is the harsh arctic weather conditions. During winter, outside air temperatures can drop to -50 degrees Celsius, which means that strict safety procedures have been implemented. Workers must always work in pairs and are not allowed outside for more than 10 minutes at a time to perform tasks. After that time, they must return indoors for a minimum of 30 minutes to maintain proper body temperature before venturing outside again. Workers must check each other to make sure that they are completely covered and have no exposed skin that will suffer third-degree frostbite within minutes.

Other than the risks to people, communications equipment and batteries for radios in trucks and portable radios used by workers outside must withstand these extreme temperatures without fail. Proper radio and battery maintenance procedures must be strictly maintained to guarantee ongoing operations.

In February, Agnico announced that the Meliadine project had shifted into full development mode. This means that after several years of exploration, the mine is moving into full production, and by the end of the third quarter, the number of permanent workers at the site will increase from about 200 to 675. The move to full development production and additional personnel signifies a needed increase in radio communications and security procedures, prompting a significant expansion of the existing TETRA network. Everyone on the site from housekeeping personnel to heavy vehicle machinery to underground miners will use the system.

Philip Quessy is Agnico’s IT general supervisor for Nunavut and has been with the company for more than seven years. A professional engineer, Quessy recommended that Agnico select TETRA to maintain efficient voice and data communications, essential to providing safe conditions for all its employees. “We also elected TETRA to greatly improve the safety of our workers as well as to simplify the maintenance and management of the radio system,” says Quessy.

From a single core infrastructure and one base station in 2015, hot-standby redundancy has been added to the TETRA network’s core. The system has a total of five site base stations (SBS) and an additional mast-mounted base station (MBS), which can easily be relocated depending on the dynamic coverage requirements. The mine now has seven UHF carriers, which because of TETRA’s four-slot TDMA 25-kilohertz technology, provide operations with a total of 28 narrowband channels at 6.25-kilohertz equivalency each to be used for either voice or data communications.

“The blast notice SDA is linked to our back-end intranet, and whenever there is an update or change in the schedule, it will automatically trigger the SDAs informing workers.” — Philip Quessy, Agnico

The mine also extended its TETRA coverage underground over a standard UHF leaky feeder system. A single carrier from the surface brings all of the connectivity necessary for underground operations. Currently, the mine has about 2 kilometers of underground drilling tunnels, with the deepest part reaching 350 meters below the surface of the ground.

Every light and heavy piece of equipment, including pickup trucks, drills, scoops, jumbos, loaders, graders and forklifts, is equipped with an IP67-rated mobile radio. To date, all radios and accessory devices have been fully tested and can withstand the extreme low arctic temperatures and the damp, salty environment.

One interesting development occurred when Agnico conducted TETRA communications over its satellite link in June 2016. A TETRA base station was installed at the company’s offices in Val-d’Or, Quebec, Canada, and connected to the core infrastructure located at the mine site using a satellite teleport based in New Orleans, Louisiana, USA. Although the signal traveled across 6,000 kilometers, Agnico was able to expand its TETRA network to the corporate office and communicate with other users on their portable radios at the mine. Usually, this type of radio communications is hindered because of the inherent latency delays in a satellite link. The mine’s robust architecture means that even these extreme connection conditions are not prohibitive to establishing workable situations.

“The success of this communications path opens the possibilities of some mine-related jobs being relocated  down south, which in turn saves money regarding travel, lodging and other related expenses,” Quessy says.

The engineering team led by Quessy at the mine is also adding short data applications (SDAs) to TETRA radios. Requiring no firmware changes, SDAs enable the automation of workflow, job allocation and remote-control capabilities, and provide intuitive display of information. Ultimately, purpose-built SDAs empower users to make better decisions, increase efficiency and work more effectively. Agnico is using these purpose-built data applications for many of its various operations. 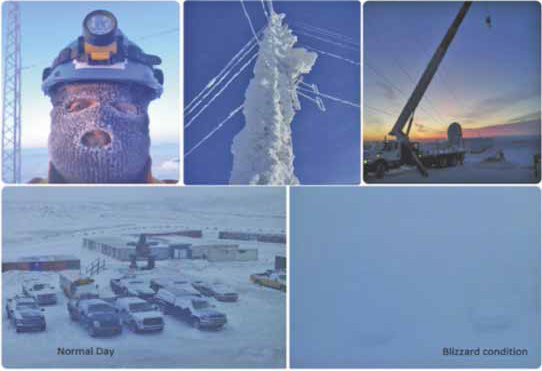 Challenges of working in the arctic

During the mining process, there is often the need to carry out scheduled blasts, which are controlled explosions used to break rock for excavation. Although heavily monitored, these are inherently dangerous occurrences, and safety precautions must be taken to ensure the well-being of workers. Therefore, advanced announcements notifying employees of upcoming blasts are of critical importance. The final announcements are always made via a voice call to everyone, but there are also displays around the mine that broadcast messages such as, “Be aware, there is a blast scheduled for today at 12:00.”

“Although TETRA already improved their voice-based blast notification because of their priority levels and full-duplex capabilities, we felt that building the blast notice SDA would be another way of reaching people, so they are aware of the upcoming blasts,” Quessy says. “The blast notice SDA is linked to our backend intranet, and whenever there is an update or change in the schedule, it will automatically trigger the SDAs, informing workers, for example, to remember that there will be a blast at 13:30 at location X.”

The notification would appear on all preselected TETRA terminals, providing a visual display of when and where the blast was taking place and who had authorized the blast.

Another common procedure is to request a stench gas release in certain locations of the mine. Stench gas is commonly used in underground ventilation systems as an alert gas for emergency evacuations. The powerful odor can be quickly dispersed throughout an underground mine to alert workers of impending danger. A stench gas release informs everyone underground that they need to immediately retreat to a refuge station and prepare to evacuate the mine.

“This new safety procedure means that, if at any time there is a severe accident that requires the mine to be evacuated, anyone from the surface or underground could potentially release the gas into the ventilation to have the mine evacuated.” — Philip Quessy, Agnico

Currently, the stench gas release is done one of two ways: manually, where a person opens a bottle of the gas into the ventilation system, or through a human-machine interface (HMI) at the surface, where a person presses a button on a computer system, releasing the gas. The SDA was therefore custom designed to allow a TETRA portable terminal user to request a gas release, first by entering a PIN, and then confirming the location and time.

“This new safety procedure means that, if at any time there is a severe accident that requires the mine to be evacuated, anyone from the surface or underground could potentially release the gas into the ventilation to have the mine evacuated,” Quessy says.

SDAs are also used to monitor essential communications systems such as satellite connectivity, the network core router and switches. Along with an in-house network monitoring system, SDAs allow the mine to receive alerts from its telecommunications infrastructure and to query different resources remotely to perform live diagnostics when far from the offices. The SDAs allow quick access to different parameters, such as current satellite latency and use, data rates and temperature in the different shelters.

“Although GPS does not require an SDA, the fact that TETRA is using standard NMEA (National Marine Electronics Association) GPS data allowed us to seamlessly integrate the positioning information into our in-house tracking software,” Quessy says. “This is another important feature, which improves on-site security because it allows the mine to track people on the road from a simple dispatch system.” 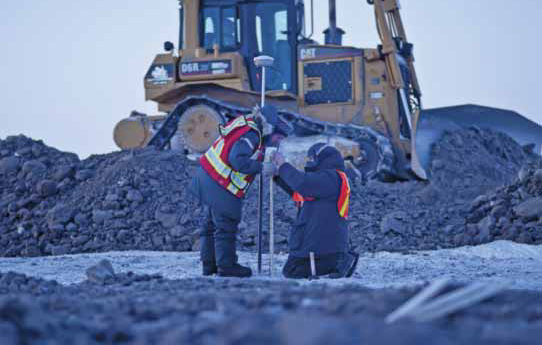 Agnico rolled out the TETRA infrastructure for the same reasons other early adopter North American companies are attracted to TETRA: interoperability, price, voice quality, reliability and full-duplex capability. Yet, the Meliadine gold mine is further unique because it’s one of the first North American operators to take advantage of TETRA’s data capabilities by creating and implementing purpose-built applications to improve security and operational efficiencies.

David Torres is senior vice president of sales for PowerTrunk, a division of Sepura Group. He is responsible for developing new business partnerships, distribution channels and market opportunities across Canada and the United States. Torres has spent his career introducing complex technical communications solutions to the global public-safety, transportation and utilities markets.
Email feedback to editor@RRMediaGroup.com