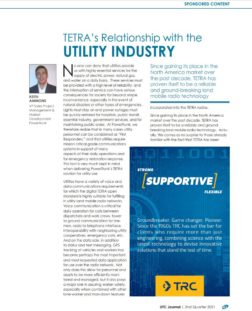 Since gaining its place in the North America market over the past decade, TETRA has proven itself to be a reliable and ground-breaking land mobile radio technology

No one can deny that utilities provide us with highly essential services for the supply of electric power, natural gas, and water on a daily basis. These services must be provided with a high level of reliability, and the interruption of service can have serious consequences for society far beyond simple inconvenience, especially in the event of natural disasters or other types of emergencies. Lights must stay on and power outages must be quickly restored for hospitals, public transit, essential industry, government services, and for maintaining public order. At PowerTrunk, we therefore realize that in many cases utility personnel can be considered as “First Responders,” and that utilities require mission critical grade communications systems in support of many aspects of their daily operations and for emergency restoration response. This fact is very much kept in mind when delivering PowerTrunk’s TETRA solution for utility use.

Utilities have a variety of voice and data communications requirements for which the digital TETRA open standard is highly suitable for fulfilling in utility land mobile radio networks. Voice communication is critical for daily operation for calls between dispatchers and work crews, tower to ground communication for linemen, radio to telephone interface, interoperability with neighboring utility cooperatives, emergency calls, etc. And on the data side, in addition to status and text messaging, GPS tracking of vehicles and workers has become perhaps the most important
and most requested data application for use over the radio network. Not only does this allow for personnel and assets to be more efficiently monitored and managed, but it also plays a major role in assuring worker safety, especially when combined with other lone-worker and man-down features incorporated into the TETRA radios.

Since gaining its place in the North America market over the past decade, TETRA has proven itself to be a reliable and groundbreaking land mobile radio technology. Actually, this comes as no surprise to those already familiar with the fact that TETRA has been widely established in Europe and throughout most of the world for around 20 years or so. It is interesting to note, however, that when TETRA did first arrive in North America, that it was for utility use. Also worth mentioning is the fact that UTC (at that time known as the Utilities Telecom Council) had a role as well in introducing the major players together.

BC Hydro in British Columbia, Canada, was the first TETRA network customer in North America. After a process of comparing various technologies including TETRA, P25, DMR, iDEN, and others, BC Hydro determined that TETRA was the solution that best met their requirements and awarded a contract in 2011 for the supply of a PowerTrunk TETRA network, which went live in 2013
and has been flawlessly in operation ever since.

At around the same time, TETRA was also gaining a foothold in the US, particularly in the public transit sector, and then a couple of years later was also adopted for utility use. In this case, Diverse Power EMC and Cobb EMC were two electric cooperatives in the state of Georgia that were independently implementing their own TETRA networks. Both companies sought openstandard solutions that were scalable, flexible, and secure, and which provided high quality voice services as well as data transmission capability, especially for GPS tracking. The idea then occurred to the cooperatives to combine their networks together, and eventually PowerTrunk was selected to make it happen. PowerTrunk provided the core infrastructure with a high degree of redundancy and enhanced reliability needed for a mission critical emergency communications system. The cooperatives were able to share the network resources, but without compromising the security or privacy of each
user.