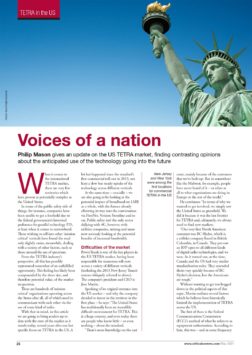 When it comes to the international TETRA market, there are very few territories which have proven as potentially complex as the United States.

In terms of the public safety side of things, for instance, companies have been unable to get a foothold due to the federal government’s historical preference for parallel technology P25, at least when it comes to narrowband. Those wishing to sell into other ‘mission critical’ verticals have found the road only slightly easier, meanwhile, dealing with a variety of other factors, such as those around the use of spectrum.

From the TETRA industry’s perspective, all this has possibly represented somewhat of an unfulfilled opportunity. This feeling has likely been compounded by the sheer size, and therefore potential value, of the market in question.

There are hundreds of ‘mission critical’ organisations operating across the States after all, all of which need to communicate with each other via the use of some kind of radio.

With that in mind, in this article we are going to bring readers up to date with the state of the market as it stands today, several years after our last specific focus on TETRA in the US. A lot has happened since the standard’s first commercial roll-out in 2013, not least a slow but steady uptake of the technology across different verticals.

At the same time – crucially – we are also going to be looking at the potential impact of broadband on LMR as a whole, with the former already elbowing its way into the conversation via FirstNet, Verizon Frontline and so on. Public safety isn’t the only sector dallying with 4G, however, with utilities companies, mining and more now seriously looking at the potential benefits of increased bandwidth.