The New York City Transit Authority (also known as NYCT) is a public authority in the U.S state of New York that operates public transportation in the New York City area. NYCT is a fundamental part of the Metropolitan Transportation Authority (MTA), the busiest and largest transit system in North America with an overall daily ground and underground ridership of 7+ million trips and a total of 557 million bus ridership a year.

The surface transit division of buses of the MTA runs 234 local routes, 71 express routes, and 20 select bus routes with the largest municipal bus fleet in the US. The bus fleet is constantly growing, currently composed of 5,700+ buses that operate 24/7 to cover the transportation needs of 8+ million New Yorkers in the five boroughs of the city; about 300 square miles of territory.

Managing the largest public transit agency in North America implies major telecommunication and technological challenges. The transportation authority needs to ensure the safety of bus passengers and transportation workforce under the most demanding situations, working 24 hours every day of the year. For this reason, the selection of a reliable radio system with voice and data capabilities integrated can be the cornerstone to comply with the goal of coordinating and controlling bus fleets of NYCT. Only a mission critical system can allow the Transit Authority to manage communications, signaling, and vehicle location with the robustness and scalability that are consistent with the challenge.

The radio technology needed by NYCT had to be an open standard with enough scalability and efficiency to carry the voice and data communications of 5,700+ buses and 1,500+ support staff operating in 29+ bus facilities. The radio system had to provide the capability to transport call signaling data, AVL, and voice traffic for every bus reliably.  Communication with the buses must be robustly supported by the radio infrastructure, ensuring system availability and maximum coverage of the bus routes that compose the service area.

Lastly, the end-user equipment must be dual-band and spectrally efficient, capable of working in 700MHz and 800MHz, with the ability to operate with other radio technologies, fundamentally P25, in critical situations where interoperability is required in frequencies allocated for public safety use.

New York City Transit Authority released a RFP that concluded in February 2016 with the award to Parsons Transportation Group of New York, Inc. of a PowerTrunk TETRA voice and data infrastructure, Command and Control CAD Solution, and thousands of radio terminals. The NYCT BRS project is meant to be the largest TETRA network in the United States by number of subscribers.

TETRA provides NYCT an open standard, spectrally-efficient, and fault-resistant radio technology that supports simultaneous voice and data services for every subscriber on the system. The integration of TETRA with CAD/AVL applications, voice quality, and data capacity represent an outstanding improvement to the NYCT Bus Command Center operations, allowing dispatchers to reliably manage multiple fleets and routes in the service area.

35+ radio sites and 40+ base stations operating dual-band 700/800MHz will provide coverage to the metropolitan area defined by the five boroughs of New York City. The system was designed to be fault-tolerant with non-single point of failure redundancy; features inherent to the mission critical nature of the PowerTrunk infrastructure.

The TETRA subscribers come with built-in GPS to report their positions to the Bus Command Center (BCC) using the optimized Automatic Vehicular Location (AVL) functionalities of the PowerTrunk Synchronous Data Manager (SDM) and Command and Control Center (CeCoCo)  system. Furthermore, the subscriber radios are FCC certified with the capability to work in the 764-870 MHz band allocated for public-safety in situations where P25 interoperability is required.

With an average weekday of 115,000+ and 30+ bus routes, Staten Island was selected for the deployment of the first stage of NYCT TETRA Bus Radio system, the Pilot.

01 In December 2019, the first TETRA calls occurred between buses of Staten Island and the NYCT Bus Control Center. Since then, the network has been progressively growing following a transition plan where the legacy radio system is being replaced by the new TETRA system, one borough at the time.
02 The mission critical feature set of the PowerTrunk TETRA solution applied to the NYCT Bus Radio system project is meant to be the key for success in the busiest and largest transit system in North America. 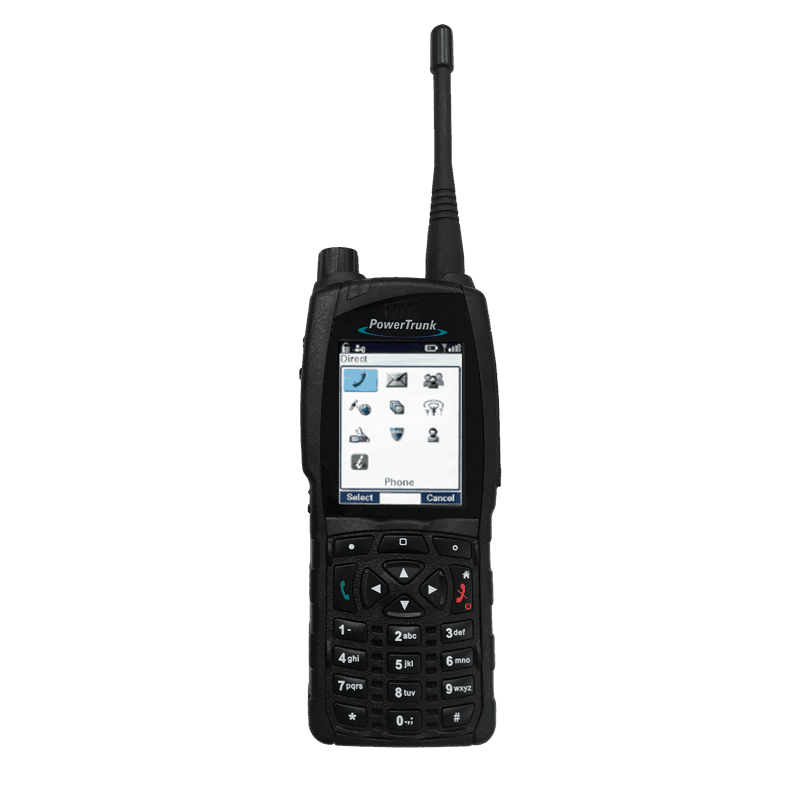 A powerful radio terminal capable of operating on 25 kHz-wide channels in the 764-870 MHz band in TETRA mode and 12.5 kHz-wide designated nationwide interoperability channels in P25 mode, selectable through the user menu.
Its built-in GPS device allows for locating the unit in CAD systems employing either raster or vector digitized maps. Usable in noisy environments such as airports and industrial settings due to its outstanding background noise cancellation capabilities and cellular-like speech quality.
Based on the same technology used by the national police forces of Germany, U.K., Belgium, The Netherlands, South Korea, Malaysia, and other countries, and by state/regional first responders in Spain, Brazil, Mexico, Argentina, Peru, and others, it provides the benefits of a large eco-system.
NOTE: This equipment has been declared to CFIUS as “Covered Products” and indicating that they are TETRA/P25. The equipment unequivocally complies with all applicable public safety standards.